Many of the people who were in the morning tutoring project decided to come to breakfast at 8 rather than 7 since we didn’t leave the hotel until 9. We had a nice leisurely meal.

We walked the mile to the Community Center and set up for the students. Rita was back and I worked with her on colors. When I was going to do body part, Ginny took over. Ginny is a retired biology teacher and Rita teaches biology at the medical college. They went into great detail about the name for parts inside and outside the body. Ginny made detailed illustrations. Rita gave me her address and phone number. She wants me to visit her home.

The sandwich options for lunch were the same four: cheese, ham and cheese, tuna or chicken salad. The kitchen staff cut up guava and papaya and juiced them for us.

Warren always starts the Team Meeting with the phrase,” It’s a great day to be an American in Cuba.” After the meeting, Ginny, Geena and I went to The Boulevard to visit the ice cream shop. There was a line outside and Geena didn’t want any ice cream so she sat outside. 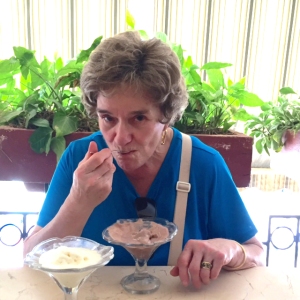 We were finally seated upstairs with two college students who played baseball for the municipal team. I ordered chocolate ice cream. One of the baseball players ordered two chocolates and a fresca (strawberry.) Ginny ordered plantain, fresca and chocolate. Alfredo, the other ball player, ordered all three flavors that were available. I decided to add fresca to my order. Ginny and I were shocked when the water returned with large sundae glasses of ice cream, one flavor in each! There was a total of eleven sundae glasses on the table for the four of us. The strawberry was good, the chocolate less so as it had ice crystals in it. Everyone at the table but me finished their ice cream.

When I was descending the steep stairs to go outside, one of the ballplayers implored me to use the handrail. How sweet.

By the time we got to the front of the restaurant, Geena was gone. We walked along The Boulevard and ran into Yamil, one of the young men associated with the Baptist Church that was our sponsor. He told us that he had seen Geena and that she had taken a pedicab back to the hotel. We were relieved to know she was okay.

Yamil accompanied us to the Cambio where I changed money. We then went on to the Everything Store where Ginny bought a watch (hers had died) and toothpaste. I bought some postcards at the government arts store. We went to the cigar store where I bought some Cohibas. We hailed a pedicab to take us back to the hotel. I do not think it was an accident that Yamil was on The Boulevard. I think the Baptist Church minister, Eduardo, wants to ensure our safety. I felt perfectly safe on my own, but I understood.

Another one of our guardian angels is Ramon. He seems to be the guy who knows where to get anything you want. He brought in photos of his family to show us. He was obviously a professional photographer at one point. He said he had to close his photography business because the government took seventy percent of his profits. He taught us a few Cuban slang expressions. Vamochando means let’s beat it out of here.

Tonight we took horse-drawn carriages, five to a carriage, to El Crucer (The Crew.) It’s decorated like a ship and you have to go up a circular staircase to get to the dining room.

We were served family-style again with some of the same dishes: plantain chips, sautéed vegetables, black beans and rice (shown above,) baked fish and chicken.

New tonight was a delicious seafood paella. The flan was creamy and very caramel.

We walked over to the Community Center after dinner. I worked with an eighteen year-old student who went to a military academy. He was hesitant to speak se we concentrated on vocabulary which I illustrated in his notebook: body part, clothing, food, and parts of a home. I told him if he wanted to improve he and his friends should speak English only for teach other for five minutes a day.