We took a group photo of our team before boarding our chartered bus for Havana. We drove for an hour and fifteen minutes and then picked up the other Global Volunteer group at their hotel in Sancti Spiritu. I hope to speak to some of them to compare experiences.

We shared Cuban slang we’d learned. “Tu me fundes” means “you drive me crazy.” “Chiva” is a cheat. A show off is a pamplimoso. A guy who talks too much is a “peterosa.”

We rode for another two and half hours until we stopped for at a roadside sandwich shop and souvenir center for lunch. The chicken and cheese sandwich I had was good. I bought lots of tschotchkes (small items that are decorative) that probably no one at home will want.

We traveled another hour to Ernest Hemingway’s home, Finca Vigia. He bought it when his third wife, Martha Gellhorn, didn’t want to stay in his one room in the Hotel Ambos Mundos in Havana. There were two restored cars parked near the house, but they did not belong to Hemingway.

Ginny had already warned me that you can’t go inside, only look in the windows. The house is on a hill overlooking the city of Havana.

The home is all white with huge windows and doors everywhere. The banyan trees and lush plantings surrounded it. There was a tower with a writing studio. In it was a round piece of furniture for book storage, a desk, and a typewriter. The view of Havana from the tower was magnificent. 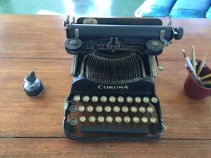 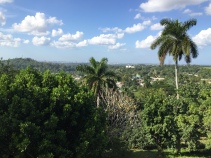 When I looked inside the rooms I was struck by the number of books and taxidermied animal heads. 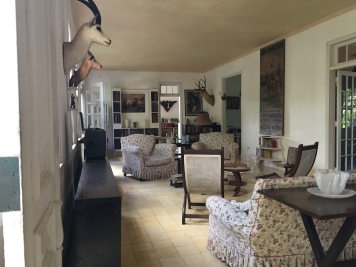 There was another study and typewriter. The house is well maintained. 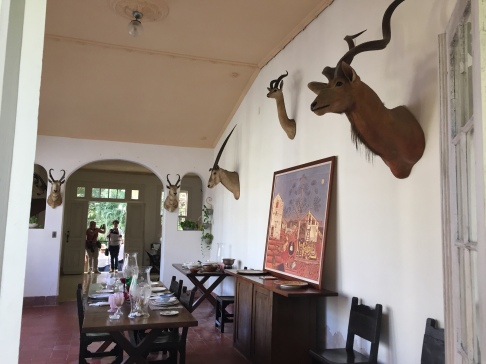 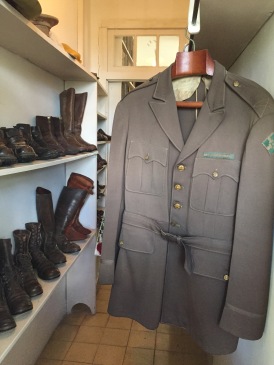 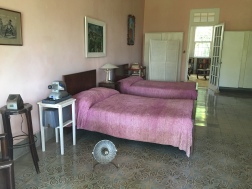 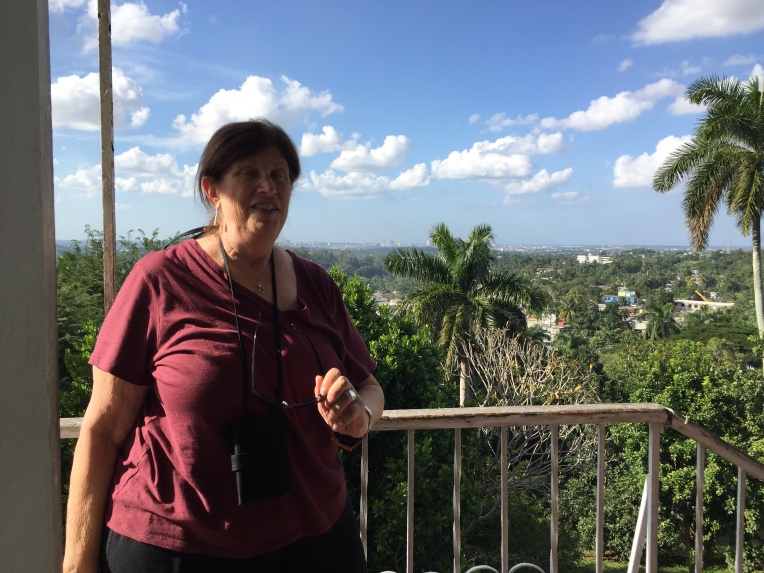 The swimming pool was very deep, at least fifteen feet deep. I could picture Hemingway and his entourage on the lounge chairs on the pool deck.

His boat, The Palmer, was also on display. There was a large captain’s chair. The boat was the antithesis of the one in The Old Man and the Sea.

Hemingway’s dogs were buried near the pool, their graves marked with their names.

Near the parking lot was an area where you could buy a cocktail, coktel vigia, in a ceramic glass with Hemingway’s visage. Two men juiced sugar cane by putting a stalk in a grinder. I think the first time through broke the fibers. They put the stalk through at least four times and the juice came pouring out. Then the men folded the stalk in half and put it through at least four more times. Then it was folded again and juiced some more.

Rum was added to the sugar juice to make the cocktail. I didn’t stir it very well so I enjoyed it until I got to the rum part.

I was so hot and covered in sweat that I was thankful to get on the air conditioned bus for the short ride to Havana. When we reached the Malecon in Havana it was like I had woken up in another country with beautiful homes and tall buildings on one side and the Caribbean Sea on the other side. We clapped when we passed the recently reopened American embassy.

We dropped the other group at El Presidente Hotel and continued to Hotel Habana Riviera. I felt dazzled by the hotel after ten days in Hotel Ciego de Avila. The hotel lobby reminded me of a Las Vegas hotel lobby. Ginny thought it was originally owned by Bugsy Segal but I looked it up and it was Myer Lansky. Mafia. Our double room had three double beds and was deliciously cool. We have a view of The Malecon and the sea from our eighth floor room. Later I heard that Sandy and David, a couple in their 80’s said that one bed was for Sandy, one for David, and one for fun. I want to be like them when I’m eighty.

We went to a restaurant called 3rd and Twenty, I think. It was a last minute substitution. The forty of us (both teams) were seated at two long tables on the patio. I had the misfortune of choosing a seat in front of the grill. It was definitely a hot spot. The pina coladas were excellent and the plantain chips were fresh but the fish was overcooked, which is how it is served in many places in Cuba.

I spoke to the people from the other volunteer group who worked on projects in Santi Spiritus. There was a small community pottery business where they sanded vases and put on the base glaze. Another woman said she put feet on the vases. A fellow from Lancaster, England worked on improving the water purification project. Another woman painted the outside of the mission including a large mural. They all tutored people in English in the evenings. They all had good things to say about their projects and they bonded with the local people. 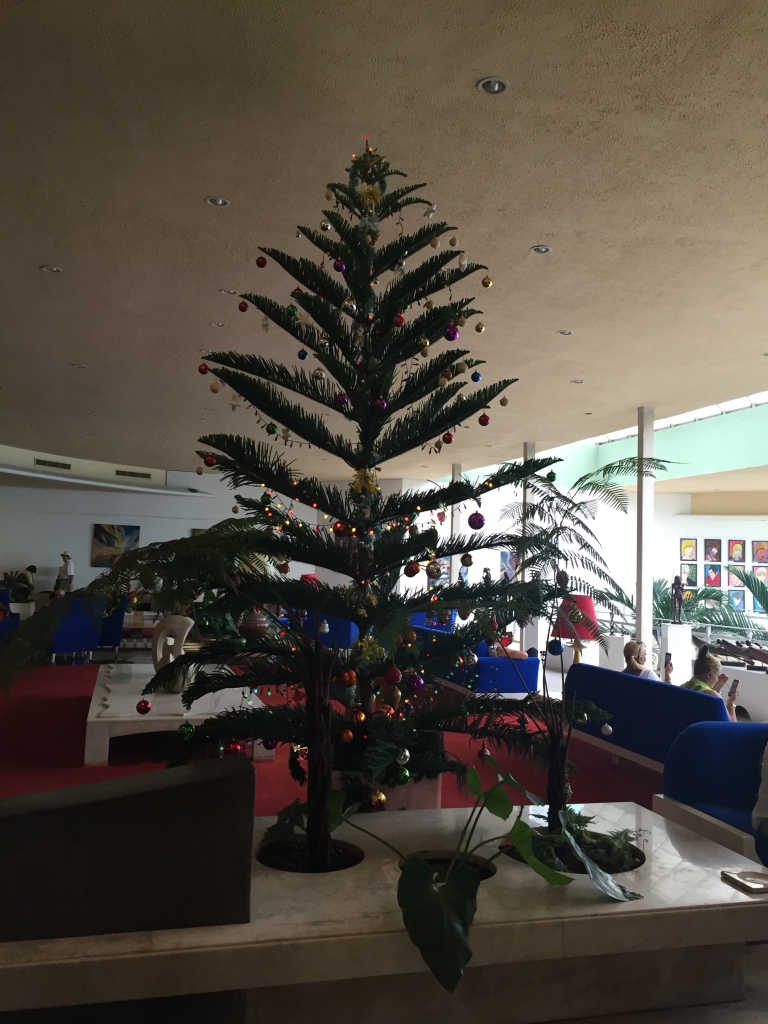 When we got back to our hotel the hotel staff had finished decorating the live Christmas tree in the lobby. It may have been a pine but I have no idea what type it was. I sat with some of the volunteers and had a nightcap in the lobby bar overlooking The Malecon. Couples hang out on the wall and it was sweet to see the affection.

Back in our room, Ginny and I watched the BBC News, my introduction back into the world after being unplugged for thirteen days.